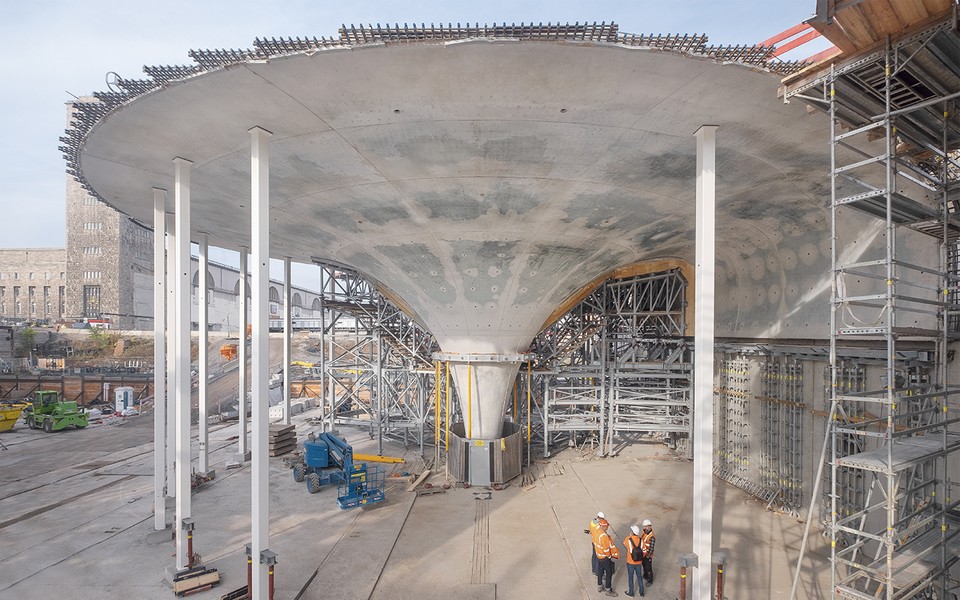 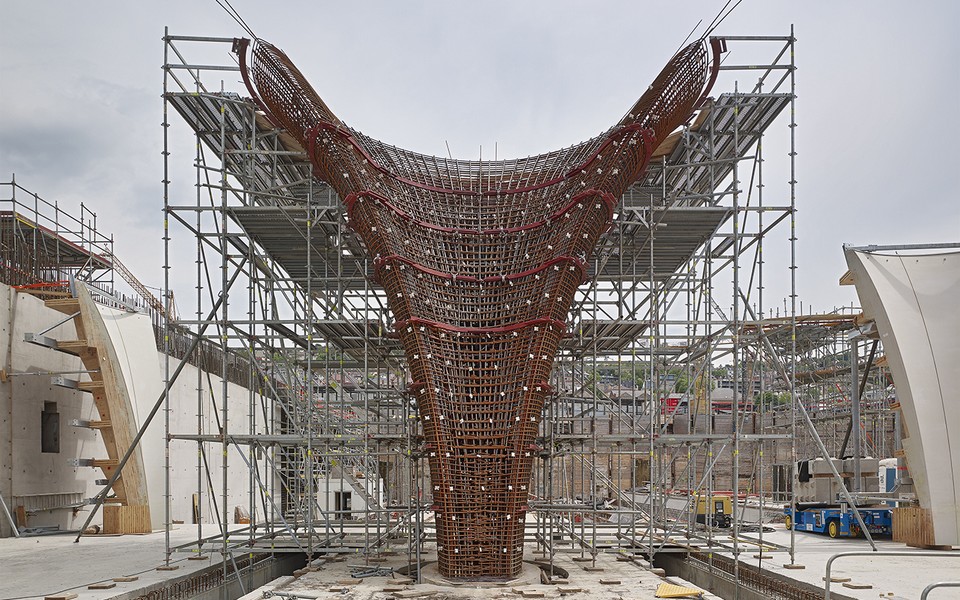 Stuttgart, 28 January 2019        With a boldly curved shape, snow white and completely smooth with absolutely no pores or visible joints, the massive “chalice” juts skyward above the construction site in Stuttgart. At the top, about 12 m up, the projecting chalice roof surrounds the “scoop” for the “light eye” and stretches up to 32 m in diameter over the delicate, downward-tapering foot – it is a work of art poured from concrete, weighing in at 2,500 t. The first of 28 chalice-shaped columns that will combine to hold the roof of Stuttgart’s new underground through station was completed in October 2018. The award-winning design by architect Christoph Ingenhoven is being realised by ZÜBLIN on behalf of client Deutsche Bahn AG as part of the Stuttgart 21 railway and urban development project. To build this challenging structure, the number one in the German building construction and civil engineering sector is applying innovative methods and digital techniques that are pushing the previously valid boundaries of buildability. The impressive shell roof with its enormous free-formed structures, inspired by the aesthetics of gothic cathedrals, puts extreme demands on the reinforced concrete structure with regard to form and function. “Something like this,” says ZÜBLIN project manager Ottmar Bögel, “has never been built before.”

The 28 columns represent a structural challenge not only for their fundamentally complex geometry but also because each “chalice” is unique, having its own inclination, shape and height (8.5–13 m). The necessary processes for their production were largely designed from scratch. ZÜBLIN Timber GmbH, a member of the project team under the direction of general contractor ZÜBLIN Subdivision Stuttgart, applied its expertise in timber engineering to design the formwork responsible for the pillars’ unique shape. The approximately 500 individual three-dimensional formwork elements are CNC-machined to high precision from spruce blocks at the factory in Aichach with toolpaths derived directly from the model via a parametric surface interpolator. Planned/actual comparison for quality control is made possible by a 3D laser scanner and an integrated BIM.5D environment with closed-loop data workflow. To meet the architectural requirement of creating a highest-quality raw concrete surface with no pores or visible joints, the machined formwork elements are coated with a special resin mix in a lacquering line designed specifically for the project. Each element is used multiple times in various combinations on the construction site, with special elements for the foot and edges of the chalice to create the different geometries of each of the pillars.

The process of creating the custom reinforcing bars is similarly complex. The complicated geometry of the chalice-shaped pillars is reflected in the reinforcement, which comprises approximately 11,000 different, partly three-dimensionally bent rebars, many of them unique. The steel is shaped in a bending facility established especially for this project mainly via interpolator between bending machine and reinforcement model. Quality control is performed using true-to-scale laser projection. The installation of the rebars and formwork in the reinforcement model is coordinated using BIMPLUS® software that was evolved specifically for the task in cooperation with software developer ALLPLAN. Each chalice requires about 450 designs to depict the extremely complex reinforcement details. To assist in the installation, the 3D model is used directly on the construction site via a large screen in the site container and as a mobile tablet solution.

In order to realise the aesthetic requirement of a smooth white surface, the concrete used for the columns was specially redesigned to create a white concrete with the necessary structural properties. Polypropylene fibres were added to meet the fire safety requirements.

Each pillar is concreted in separate phases. First, the foot of the chalice is poured, the height of which (up to 7.20 m) can be varied using three different sets of formwork. This is followed later by the chalice itself, with around 700 m³ of concrete for its sweeping 6 to 6.50 m high shape. The final step is the concreting of a “scoop” on top of the chalice roof surrounding an opening 16 m in diameter for the “light eye”.

The second pillar is scheduled for completion in March 2019. From the middle of the year, three chalices are to be built parallel to each other. When six finished chalices stand together as a group, the remaining space in between will be slowly filled. The one-of-a-kind structure is to be completed by late 2022. The 28 light domes will then protrude from out of Straßburger Platz and the aboveground green roof in Schlossgarten Park. They will help to evenly distribute daylight through the bright chalices into the underground station hall to create a friendly, light-flooded atmosphere.

We are currently taking extraordinary measures in the organisation of our business processes to safeguard the health of us all while continuing to operate our business as smoothly as possible. We depend on the international movement of goods and on the situation of our partner companies and are therefore trying every day to respond to the dynamic situation as best as we can.

For the continuation of our business operations, our priority number one is to implement the official directives to interrupt the COVID-19 infection chains in order to protect the health not only of our employees but also of our business partners.

This may result in a longer processing time than usual for some inquiries. To contact us, please use the regular e-mail address or direct telephone number of your contact person. We are doing everything we can to be the reliable partner you have had in us so far, even in this very unusual situation.

Thank you for your trust in us. Take care of yourself and your family and stay healthy!

Your team from ZÜBLIN Timber